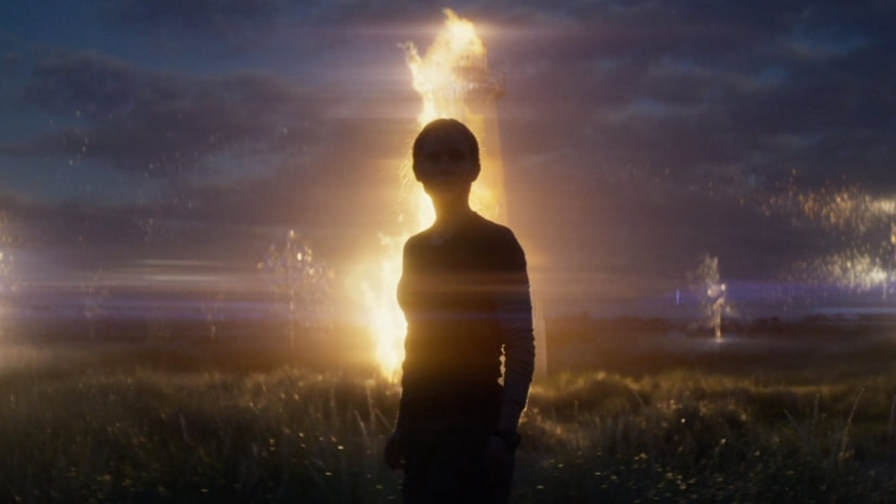 While watching Annihilation, Alex Garland’s new film released worldwide on Netflix, my first thought isn’t that it reminds me of his previous film, Ex Machina. Rather, I’m reminded of J. G. Ballard’s The Drowned World. Truth be told, I guess my first thought was that I wished it was in a cinema that I was watching it, but nevertheless...The Drowned World sees scientists losing their minds in a swamp-turned London. As the new creatures and incessant heat hypnotise them out of time and mind, they are enraptured by this new chaotic place, forgetting the old world and searching for paradise in the new one. Annihilation sees our scientists become hypnotised by the new chaotic order of nature, its creatures and creations stretching the realms of what we thought could exist. The two ecological parables share similar warnings about nature, about man, and about how we find our place when the world around us can change so drastically.

Others think more of Tarkovsky and his meditations on existence and memory found in Solaris and Stalker, and I see that too. Memories become real, and concrete, like in Solaris. ‘The Shimmer’ of the film forces our all-female reconnaissance team to confront the deepest parts of themselves, depths they know exist but can’t face. Those that can’t reconcile with themselves die violently. For those that can, well, something else happens. Just as Stalker does, Annihilation ruminates on what makes up a human, the paradoxical impulses, the desires and fears, the memories, the emotions. Stalker, as the slower and more ponderous of the two, implies much of this, leaving its characters inner lives just that; internal. Annihilation refracts what’s inside us, and externalises it to be viewed. It’s something we can’t look away from. As the scientists head deeper into The Shimmer, it becomes harder and harder for them to avoid what’s inside them. Film is the perfect medium for such themes, and for such an idea. Instead of overt description with words, we see the internal terrain of characters mapped out before them.

But maybe instead I think more of Jonathan Glazer’s Under The Skin, a film of implied meaning and dense, semiotically rich images. It looks at humanity through the eyes of the Other. In Under The Skin, Scarlett Johansson looks human but is far from it, detached completely from everything that makes us who we are. Underneath, she is alien. Even at the end of the film, as she peels away the skin she’s wearing, we get the sense that what’s underneath still isn’t who she truly is, that we’ve simply peeled away a single layer of camouflage and that more remain. Under The Skin’s impressionistic sequences are evoked in Annihilation, during the climax as we see imitations of humans. The ‘being’ in Annihilation imitates and mirrors Natalie Portman’s Biologist. It is because of, and not in spite of, the inhuman and uncanny valley the alien inhabits that The Biologist comes to understand herself.

Better yet, the influence of David Cronenberg’s Videodrome or John Carpenter’s The Thing - classic body horrors that belie a deeper truth about our inner lives and what makes us ‘us’ - is obvious. Not least during a grotesquely unexpected exploration into someone’s abdomen, a la Videodrome. Peter Weir’s Picnic At Hanging Rock or Carol Morley’s The Falling share elements too, an unreality and an uncertainty about what’s fact and what’s imagined, and how our psychology and inner lives can be responsible for this.

Perhaps too, Josef Conrad’s Heart Of Darkness and by extension, Coppola’s Apocalypse Now are influences. This time, however, instead of descending into the depths of what ‘man’ can become, as if ‘man’ is something apart from ourselves, we look at what ‘we’ become. Us, me, you, I.

Maybe Annihilation is like all of these. I think so. It’s like them in specific ways, and unlike them in many others. It’s unlike a lot of films I’ve seen, and it’s cemented Alex Garland as a voice strong enough and confident enough to match those above. To be mentioned with them, and not compared to them.

Because yes, while the film is similar to all of the above works, and while its influences are worn on its sleeve, the film entirely belongs to Garland, and of course to the others that worked on it. Where Tarkovsky had a seriousness that eclipsed most filmmakers, Garland has the occasional flash of complex humour. Where Glazer focused heavily on withholding explicit meaning, and intentionally confused the audience, Garland treats us as he would himself, with respect for our ability to follow image and story, and construct meaning ourselves, with the lightest touch of guidance from him. Where Cronenberg and Carpenter revelled in the gore and fright of body horrors, Garland understates it. Where Weir and Morley prefer to ask questions of our psychology but come to few conclusions (intentionally, and masterfully I might add), Garland both asks and suggests answers, but never tells us whether we should accept them.

Where Conrad and Coppola say we should face our own darkness and try to defeat it, Garland says instead of railing against it, why can’t we accept it? In a telling line, one of the scientists says to Portman “Ventress wants to face it. You want to fight it. But I don’t think I want either of those things.” The scientist proceeds to an off screen conclusion that can only be described as beautiful and poetic, all without us actually seeing it.

The film is a wonderful exploration of the hard parts of being human, with imagery as beautiful as it’s ideas, and performances and characters that seem as real as you, reader, or I. And while there is occasional evidence of a scene being cut, of part of the story missing, as a whole Annihilation deserves to be seen, and above all deserves a big silver screen, with people waiting in the dark to see it. It is a film rooted in cinematic tradition and history. Inescapably so. It should be part of the same spectacle as its forebears, because one day I am sure that we will be able to call some films Garland-esque.