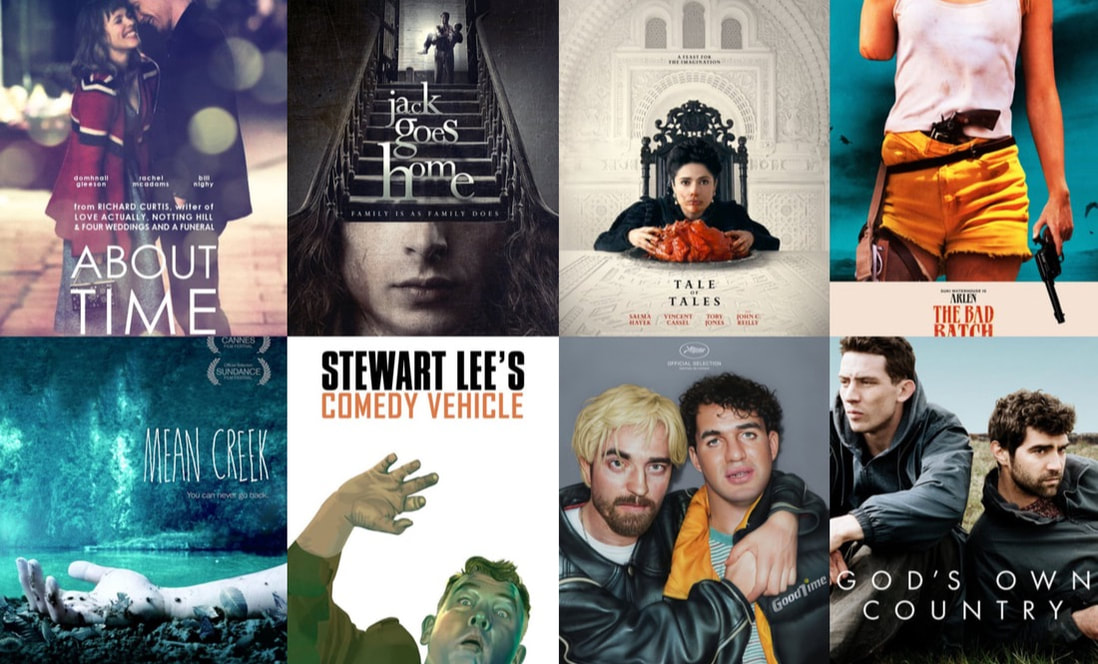 While here at Filmosophy we love the experience of going to the cinema, there’s something about sitting in the dark and staring up at the light as the screen envelopes you that feels somewhat transcendent - as if there’s some sort of magnitude about it. Of course, sometimes there’s nothing better than not leaving the house, turning the lights down and watching something online in the comfort of a duvet or sofa. In celebration of staying in and not spending money, we’ve narrowed down a few of our lesser-known choice favourites from Netflix, in case you’re ever in desperate need of some kind of filter (we’re definitely sure that nobody’s done this before, and there exists no lists online featuring the best of these websites). We’ve aimed for these to be ones you might scroll past without giving much thought.

Mean Creek (2004) - dir. Jacob Aaron Estes
One of 2 films on the list starring Rory Culkin, the younger brother of The Pizza Underground frontman Macauley Culkin (who also did a little known Christmas film called Home Alone that you should definitely check out). Mean Creek is a rough watch, there’s no two ways about it. A group of teenagers devise a plan to humiliate the local, troubled bully by inviting him out on a boating trip. Needless to say, things go wrong and the film’s descent into tragedy and sombre consequences is gripping until the end. It’s refreshing to see children on screen have such agency, director Jacob Aaron Estes treats his young subjects with respect, and their choices are given real weight in the film.

God’s Own Country (2017) - dir. Francis Lee
We first saw God’s Own Country at the Glasgow Film Theatre. Despite there only being 6 or 7 people in the screening, the tears were loud and the sniffles were constant. In short the film is a wonderful love story set on a farm in the Yorkshire Dales. Never has the northern English landscape been so emotionally and vividly presented on screen. You can smell the mud, feel the roughness of the land and the bitterness of the cold. But you can also witness the beauty, . In that greatest of British traditions, the emotional weight of the film is often transmuted into the physical, and left unsaid. Backbreaking work, early starts and long cold days are the catalyst for the relationship between the two farmers

Tale Of Tales (2016) - dir. Matteo Garrone
I’ve never seen something quite as unique and anachronistic as Tale Of Tales. Based on fairytales by a 17th-Century Italian admired by The Brothers Grimm, it is an interwoven collection of fantastical stories, paying homage to everything from George Méliès, classical fairytales, 80s body-horror, all the while staying abreast of the contemporary concerns of vanity, greed, desire. It has a star-studded cast and was an absurd viewing experience in the cinema. It is fairytale distilled into a pure form, keeping its most ridiculous events in the script even while Garrone creates beautiful, haunting, indelible images on the screen in front of us.

Good Time (2017) - dir. The Safdie Brothers
The post-Twilight years have been kind to Robert Pattinson, whose sheer talent has catapulted him to indie acclaim with fantastic turns in the films of Cronenberg, Michôd, Herzog, with the Safdie Brothers now joining this illustrious catalogue of directors who have, with Good Time, created a character that leaves his mark as much for good performance as for being entirely morally bankrupt. Good Time stars Pattinson and Benny Safdie (one half of the directing siblings) as bank robber and all around fuckhead Connie and his developmentally disabled brother Nick. We are offered far more than your standard heist genre fair here; the film is full of energy in a messy, hectic sometimes frantic way that parallels its lead character. Humanity and love and crisis all swarm together and create something energising, surreal and touchingly affecting.

Jack Goes Home (2016) - dir. Thomas Dekker
Our second film featuring Rory Culkin, 10 years older now and with different concerns on his mind as a young man returning home for his father’s funeral. On a platform brimming with broadly similar horrors and uninventive jump-scares, a good Netflix horror is a valuable commodity, to be shared and loved. Without hesitation I include Jack Goes Home in this bracket. It is a film about grief, sure. One about parenthood, and the fears one has when you know you’re going to be one. But above all that it is just downright unsettling and scary. Scream-Queen turned creepy-Mother-figure Lin Shaye is creepy bordering on crazy throughout, and lends a dark, mysterious air to proceedings as Jack’s grieving mother. Culkin himself has grown into a gaunt, pale man with searching eyes and a uniquely odd voice that suits his character to a T, and the film basks in a certain spooky weirdness to give us many of our scares.

About Time (2013) - dir. Richard Curtis
About Time is much more well known than the other films on this list, and does feature Domnhall Gleeson who can be found in cinema literally everywhere this past few years. It’s also a soppy romcom, that frequently breaks its own internal mechanical logic of time travel. It’s close to being as cloying as Love Actually, and indeed, is directed by Richard Curtis again. The characters have no money problems despite living in the centre of London, or in a huge mansion by the sea, and the problems raised by its decidedly creepy start to the central relationship are numerous and glossed over with romantic-comedy’s typical twee cheerfulness and naivety.
BUT.
About Time also features the most touching father-son relationship there’s been in years. It’s a joyous celebration of new life too. It’s emotional story logic remains unbroken throughout, which for me is what counts. It would be as cloying as Love Actually if it wasn’t so naturally directed. Because while it lingers and loves its soppy moments, it is with a lighter touch and a keener sense of the real that Curtis directs them. Bill Nighy is effortlessly quiet, charming and kind and the film’s soundtrack has much more depth to it than you would think. Ignore its faults, let yourself see it’s charm and if you can’t, if it’s too full of middle-class, heterosexual white people with no cares in the world except love then unfortunately you’ll just have to wait until Netflix buys Big Eden to experience that same rom-com guilty-pleasure I did.

Stewart Lee’s Comedy Vehicle (2009-16) - created by. Stewart Lee
What?! Filmosophy talking about a piece of media that isn’t a film?! What on Earth is happening?! Rest assured, it is with good reason for is there anything Netflix has more of than stand-up comedy? With so much to choose from, it was a daunting task picking one for this list, but I binge watched 3 seasons and a stand-up special of Stewart Lee and haven’t been able to watch anyone else do stand-up since. To analyse and deconstruct comedy is a sure way to make it completely unfunny so I will say little. In short, Stewart Lee the comedian is on a mission to make stand-up comedy be seen as an art form, with its own inherent structure and rules (that of course can be broken). No part of his routine can be edited down into a 2-minute clip for social media, to appreciate his work requires that you watch all of it, as you would a film or TV show. Stewart Lee the character, on the other hand, is on a one man mission to - in no particular order of importance - have a nervous breakdown, alienate his entire audience, repeat jokes ad nauseum, exaggerate his identity as a 45-year old functioning alcoholic father of two, lament at the fact he gets any attention for his work, and insert obscure and niche cultural references whenever possible to make himself feel better about being a member of the liberal, guardian-reading, elitist intelligentsia. All this while championing political correctness to an admirably huge extent. And it works, I have never laughed so much. Criminally, Netflix have removed all but 1 season of this, so hunt around for it elsewhere after you’ve seen that.

The Bad Batch (2017) - dir. Ana Lily Amirpour
Ana Lily Amirpour’s punky follow-up to the acclaimed A Girl Walks Home Alone At Night straddles the line between a self-indulgent drama that deliberately obfuscates meaning, and the artful, socially aware, inherently unique voice that shone through in the industrial landscapes of her Iranian horror. To say that she makes the film her own would be an understatement of significant magnitude. It is a singular film of dystopian leanings, carried by the tough, unshakeable Suki Waterhouse. The fact she is dismembered at the start of the film seems not to play too much on her mind, and her stoicism continues throughout. A good thing too, the world of The Bad Batch is full of strangeness and though the film sometimes gets bogged down in it, often in danger of becoming tedious, appearances from the well known faces of Keanu Reeves, Giovanni Ribisi, Jim Carrey and Jason Momoa ensure that this doesn’t happen. The characters paint a picture of a different world, in contrast to what would often be the case: of the world helping paint a picture of our characters. Perhaps it’s a world created by them, in which case it reflects them completely. Safe to say, it is Amirpour’s world we are in and like it or not, you’d be hard pressed to find a director who can so completely present their vision on the screen.