Several primary school students sit in a row in a swimming pool, waiting for their turn to jump into the water. The camera, and thus the spectator, is positioned at eye level and we can hear the ambient sound of the pool with children excitedly screaming and giggling. But our focus is directed towards a girl, seven-year-old Nora (Maya Vanderbeque), who looks visibly anxious, nervously looking around and biting her lips. We sit very close to her, only one other girl divides us and the our feeling of being absolutely present is intensified by the blurred surroundings and camera’s focus being solely on the girl. It is almost like the camera, and thus ourselves are soaking, with water pouring past our eyes, not allowing us to see clearly. Suddenly we are standing up and positioned in the queue to jump, Nora stands in front of us. We move quickly as the other children take their turns but Nora refuses – we can see her back becoming tense. Is she going to jump or risk becoming a target for bullying? With her teacher holding her hand, Nora follows the other students and jumps. 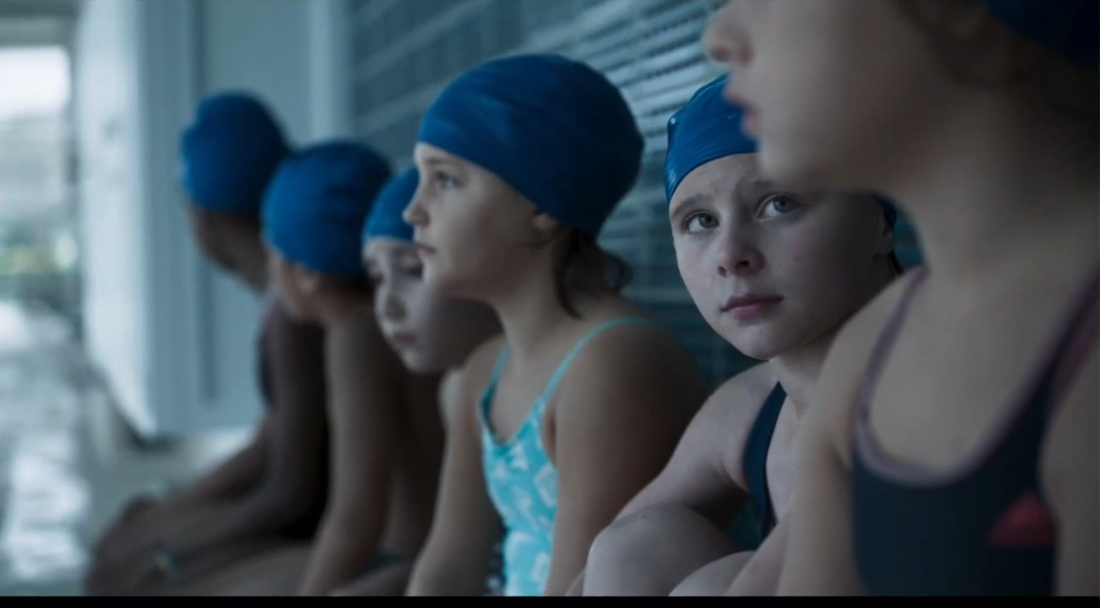 This short scene from Playground, a 2021 Belgian drama written and directed by Laura Wandel, transported me to my childhood and the swimming classes I had to take in primary school. The film allowed me to feel again the intensity of my fears: the fear of jumping and of embarrassment if I fail to jump. I became that fragile, scared, small not just because of that low-level camera) girl in a chaotic, loud environment.

Playground is not another dry, moralistic tale about bullying told from the superior position of an adult. It is rather a film that, like an octopus embraces us tightly with its tentacles and devours us, only to return us transformed. It is important to indicate that the original French title, Un monde, translate as ‘a world’, thereby indicating that for children the playground is their whole world as they have not yet developed the techniques needed to distance and protect themselves from harsh situations. The film perfectly highlights that the adults also have not perfected such strategies: the school’s playground does not exist isolated from the world of grown-ups, it rather constitutes a microcosm; a caricatured copy.

Wandel’s film portrays Nora’s failed endeavours to save her brother Abel (Günter Duret)  from being bullied but also from becoming a bully himself. The colour palette of the film is supersaturated with blues and greys making the school environments appear like prison or hospital; raw and clinical. The girl attempts to navigate between helping her brother but also from becoming a target of emotional and physical violence herself. As we follow Nora around school in shaky and often blurry handheld shots, trying to squeeze through the crowds of students, constantly bombarded with loud diegetic sounds of school corridors (the film entirely lacks non-diegetic sound), we lose our objective distance towards the film. The ways in which Wandel directs her actors and creates mise-en-scene do not allow us to remain detached observers: we are forced into becoming participants, desperately looking for adults to offer us some guidance. Most of them exist only as blurry silhouettes. There are, however, a few grown-ups that we can see in full focus: the father, and two teachers whose support is largely not efficient.

Reminiscing Lars von trier’s famous remark that “a film should be like a rock in the shoe”, Playground is definitely one of these cinematic gems that will stay with us for a long time after the screening. It is an immersive portrayal of the brutal reality of childhood, entirely bereft of the nostalgic sweetness but enticing us, the adults, to instantiate societal changes that will transform school playgrounds into places where no child has to become an abuser to avoid being abused.
​
Powered by